Aphria needs to respond to the severe allegations. Otherwise, they're going to have serious trouble attracting capital and talent. The cannabis space is taboo as it is; this only makes it worse.

Marijuana producer Aphria Inc. says its board of directors has appointed a special committee of independent directors to review the company's acquisition of Latam Holdings Inc., which has been criticized by short sellers.

The company says it remains confident in the deal, but is undertaking the comprehensive review in the face of what it called "inaccurate and misleading accusations" by the short sellers.

Quintessential Capital Management and Hindenburg Research have alleged that the cannabis grower's acquisition of assets in Colombia, Argentina and Jamaica totalling $280 million US from Scythian Biosciences were "largely worthless."

The third match might not end in a win for Shah but the series will be remembered for his 14 wickets in the second Test and for this incredible record:

On the fourth morning of the final Test in Abu Dhabi against New Zealand, Yasir Shah did not merely break an 82-year-old record, he smashed it.

By dismissing William Somerville roughly half an hour into the morning, he picked up his 200th Test wicket in just his 33rd Test. That breaks the record for the fastest to 200 Test wickets, so long held by another legspinner, Clarrie Grimmett who reached the mark in his 36th Test.

Of course they don't! pic.twitter.com/4C6RInuRRe

A Muslim girl empties a bottle of water of a white girl on a bus. I wonder if this will be covered extensively by the mainstream media and if the white girl will receive hundreds of thousands of pounds from fund raising appeals? pic.twitter.com/RTA6aWQLIa

"O cross pigs we'll color your Christmas with your blood," states a message in the corner of the image, which was distributed online. "So drink its toast and your children's presents will be your corpse pieces if Allah wants."

The next wave of history

At this point, due to the mass movement of peoples, civil war for control of the territory of the United States is not only not impossible, it is all but inevitable. There are three choices: subjugation, secession, and civil war. In the most likely scenario, we will see elements of all three, beginning with subjugation of the genuine Christian American nation, followed by secession, then what passes for civil war.

And the reason it will happen is because far too many people like Sarah Hoyt were permitted to not only become legal citizens, but were given a voice in government. Now the Fake Americans are more or less ruling over the people they invaded, and many people who came here because they wanted to live in an American society ruled by Americans don't like the inevitable consequences of their own collective actions.

It's sad and cruel. There are White people in America whose ancestors built a great country; they fought in the World Wars; their families made great sacrifices. Now, their young progeny is mocked on television, ungrateful and malevolent coloreds advocate their removal from "safe spaces", and they are openly and explicitly discriminated against in colleges, universities, and in the job market. I truly feel sorry for these Whites who were born in the US after 9/11. They will grow up to witness the destruction of their powerful nation and then see the world plunge into a series of terrible wars that will set new benchmarks in lethality.

This is what will be bequeathed to the true Americans.

Twitter’s Legal Department has sent me an Email informing me that I have broken Pakistan’s Law. I have attached the Tweet in question, so judge for yourselves.

I am not from Pakistan nor am I a Pakistani citizen. Pakistan has no authority over what I say. Get out of here. pic.twitter.com/wsVacLXpJm 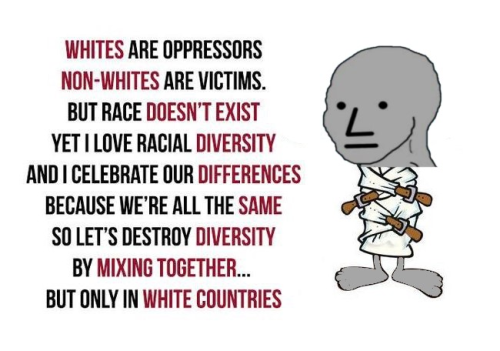 A lot more from the Shiv Lord.

Generation Zyklon is learning about diversity the hard way.

The evil that is mehndi

Mehndi is basically tattoo ink that is not permanent. Apparently, it's a serious issue at a school in Pakistan.

Harassment in schools is not new. Videos and pictures of administration members harassing and torturing students have often circulated on social media and in the latest of such incidents, it has emerged that a six-year-old girl in Karachi is being punished daily in school for having mehndi (henna) on her hands.

The monsters teachers will simply make up a reason to torture a student.

“Punishment: No participation in assembly, she keeps standing the other side while the other students sit; mental harassment by scolding her before joining the class; no breaks; daily notice verbally and on-diary both.”

Nobody does child abuse better than Muslim teachers.

When Indonesian politician Grace Natalie pledged her party would not support discriminatory local laws based on “the Bible or sharia”, she probably did not expect to be investigated by police.

Just last year, a Christian politician was jailed for a couple of years for the horrible crime of blasphemy in Indonesia! Seriously, Natalie, you're living in the largest Islamic country on Earth. If you haven't seen and understood the savage nature of Islam already, then you're pretty dumb.

Eggi Sudjana, a politician from the National Mandate Party, which supports Widodo’s opponent Prabowo Subianto – had reported her comments, which also included a call for an end to the forced closure of places of worship.

Sudjana claimed Natalie’s position on sharia went against the Koran and was potentially blasphemous.

If that's the benchmark for blasphemy, then non-Muslims in Indonesia are in deep shit.

Aphria: A Shell Game with a Cannabis Business on the Side.

Aphria is the third largest seller of cannabis in terms of revenue in Canada. It is one of only two companies to have a recreational supply deal with every province in Canada. This is a serious business. The report, if true, is utterly shocking. The Latin American acquisitions are basically fraudulent. It's -29% in just under two hours -- the largest one-day drop in its entire trading history. The share price has crashed through the 52-week low. It's down by 70% from its all-time high in January.

Also, the report is dragging down the entire cannabis sector.

This is like reading an account of an easily avoided car crash. I actually tend to believe that the nerdling Tyson didn't genuinely hit on these women, but he quite clearly wanted to do so, and worse, behaved in a manner that let them know the door was open if they wanted to initiate anything with him. All the talk about "friendship" and "restrained but genuine affection" and "special handshakes" is just dishonest Gamma speak for "I wanted to pursue her but was afraid to do so."

Never forget that women get far more creeped out by the guys who want to hit on them, but are afraid to, than by the men who openly pursue them. They react very negatively to male incongruity, and as a black man and media celebrity, Tyson's behavior would have struck them as bizarrely incongruous.

Now, Tyson will pay for not having a pair of balls.

Sympathies to those laid off at @Mic. In memoriam, this from deep in the #satiria archives. #FakeNews #Muslums #mic pic.twitter.com/yWS8okWDVO

Better to own up to who you tend to envy.
Umberto Eco, a man of yuuge erudition.
His library, Milan. pic.twitter.com/rVT1sLzja1

Umberto Eco's first novel, The Name of the Rose, is fantastic.

No mention of race or religion:

A toddler has been left with scars all over her body after she was bitten 15 times by children at a soft play centre.

Her mum Becky has since claimed a little boy, who is said to be around three-years-old, was found with ‘a big smile on his face, with blood all around his mouth’ after the incident.

The 33-year-old mum told The Mirror: ‘She looks like she’s been savaged by a dog, not a child.’

Somali Muslims were the culprits according to the comments there.