Is there *anything* men can't do? pic.twitter.com/fzPZbMZSMV

How the media manufactures news

That's because Obama was a cool, smart, savvy Negro while Trump is the Big Mean White-Orange Hitler. Also, this meme: 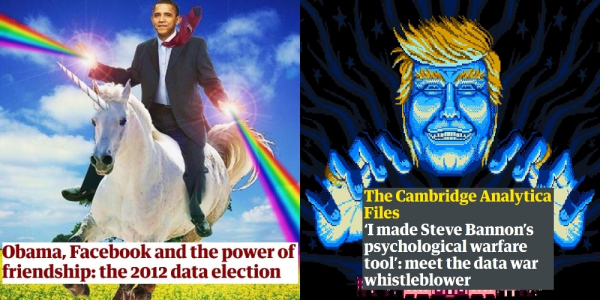 The burden of poof

This month, University of Wisconsin Madison students enrolled in a political science class focused on terrorism will study acts perpetrated by radicals in the name of Islam.

You can guess what happened next.

But one Muslim student, who is also a campus leader and activist, was briefly enrolled in the class. And after the very first day, student Ali Khan took to social media to express outrage over the content of “Political Science 347: Terrorism” and the way the professor approached the subject.

One has to give Khan credit. He knows how to play the smug, ignorant, virtue signalling, White knight mob at the university. Since the professor is a White guy and Khan is a colored cunt, the professor must be wrong! Just look at the following rhetoric.

Khan ended his post by publishing the professor’s name and email address, and told his peers “for all those who ally with the Muslim and/or Student of Color community, this is your chance. For us, constantly debating with professors, stepping up to always teach others, and simply being present around this type of rhetoric, is emotionally taxing. This is where you come in. Do the work and educate your peers.”

Khan doesn't say that the professor is wrong about ABC because XYZ. Nope. Instead, he presents the whole situation as oppressive. To Khan, the truth is irrelevant. What matters is making life a hellish experience for the professor. This way other instructors with comfortable lives will think twice about showcasing the wickedness of Islam.

[...] He was questioned about his support for Islamic State, the caliphate and Sharia Law, which he believed should be implemented in Australia for all Muslims and non-Muslims.

"They would have to sign a contract to live with, amongst Muslims in peace," he said. "Whoever does not sign the contract either leaves the country or is executed."

It's amazing how much one can learn about Islam by simply listening to Muslims.

One Sudanese woman stands up

A Sudanese woman received death threats for calling out Islamic modesty culture in front of a Muslim cleric.

"My clothes respect my humanity and are part of my freedom of choice, and not the choice of society with its sick and backwards traditions, which it then labels Sharia." pic.twitter.com/ydqvC6F1S7

Feminist women in the West have no time for real oppression. They're too busy counting and then complaining about the number of vaginas in prestigious positions of the day.

Physics is NOT OK!

The European nuclear research center known as CERN has banned Professor Alessandro Strumia of Pisa University after he gave a slide presentation at a conference that discussed male/female differences in career outcomes in the field of physics.

CERN has removed his presentation from their website. Where can one get his eeevil facts?

The brave Professor Alessandro Strumia has been suspended by CERN:

A senior scientist who said physics "was invented and built by men" has been suspended with immediate effect from working with the European nuclear research centre Cern.

The vaginas can't handle the truth!

There is nothing, literally nothing, that some women and their male enablers will not blithely set about destroying because they find the idea of their intrinsic inferiority at it to be infuriating.

Our sick society has been diseased by constant exposure to the Lies pumped out every day for decades by the Globohomo Ministry of Propaganda. One of those Lies is the assertion that there exists “White male privilege” which victimizes and oppresses all other classes of people.

The realty is the polar opposite: White female privilege is typically the operating norm, and White men are often victimized by it.

Also, thanks to the Internet, these women can get extra attention and, in the case of Ford, some sweet sweet cash.

On the road to shithole

Muhammad Javed, president of the Yukon Muslim Society, welcomed a crowd to the mosque's open house where many in the audience were non-Muslims who stopped by to offer congratulations over coffee.

This is what happens when a society is ignorant of the bloody history of Islam.

The nature of Muslims

The Canadian government suspends and fines an Islamic "charity":

A major Canadian Islamic organization has been suspended and fined by federal charities regulators following an audit that raised concerns it had “provided resources” that may have been used to support to armed militancy.

The Canada Revenue Agency said it had suspended the Islamic Society of North America-Canada (ISNA-Canada) for a year effective Sept. 12 and ordered the Mississauga-based charity to pay a $550,000 penalty.

Government auditors alleged ISNA-Canada had “failed to conduct any meaningful due diligence” when it transferred $136,000 to the war-torn Kashmir region, where the militant Hizbul Muhajideen has been fighting Indian troops.

Amazon today announced it is increasing its minimum wage to $15 for all full-time, part-time, temporary (including those hired by agencies), and seasonal employees across the U.S.—effective November 1. The new Amazon$15 minimum wage will benefit more than 250,000 Amazon employees, as well as over 100,000 seasonal employees who will be hired at Amazon sites across the country this holiday.

Hmm, why would Amazon raise its own labor costs compared to its competition? Wouldn't this hurt Amazon in the long r-

Amazon’s public policy team will also begin advocating for an increase in the federal minimum wage.

“We will be working to gain Congressional support for an increase in the federal minimum wage. The current rate of $7.25 was set nearly a decade ago,” said Jay Carney, Senior Vice President of Amazon Global Corporate Affairs. “We intend to advocate for a minimum wage increase that will have a profound impact on the lives of tens of millions of people and families across this country.”

Clever sons of bitches. Amazon attracts more workers in the short run while they destroy their current minimum wage competitors by forcing them to pay more than double to their workers in the long run! Yet, clowns will call them compassionate.

#Egypt detains yet another woman for speaking out against harassment! Welcome to the #MiddleEast, where #FreeSpeech is a bigger crime than sexual assault. #WhyIDidntReport #BelieveWomen #BelieveSurvivors #TimesUp #MeToo @WM_Global @ConfessionsExMu https://t.co/Rg31RSu01j

Quebec moves to the Right

In June, it was Ontario. Today, it's Quebec:

Coalition Avenir Québec will form a majority government in Quebec, dealing a historic blow to the incumbent Liberals, according to a CBC News projection issued just 33 minutes after polls closed across the province.

In just five months, two of the biggest provinces of Canada have elected parties of the Right.

The CAQ. a right-of-centre party which promises to lower taxes, privatize some aspects of the health-care system, and cut the number of immigrants, capitalized on an appetite for change among Quebec voters.

The federal election is next year. These two results must be a net-negative for the Liberals.

Trying to appeal to Millennials via #FamilyGuy. pic.twitter.com/ZriGPKjWQJ

Not "choosing" the burqa

Her parents are pleading with her saying she won't be allowed in school if she doesn't wear it. Her look at the end is heartbreaking. This is the modesty culture behind veiling...it is anti-women and backward. https://t.co/yJRqNgvXHy

From overwhelming majority to shrinking minority in a couple of generations, the blink of a historical eye

As goes California, so goes the country

The 3 hard science Nobel Prizes have long been resistant to kowtowing to the Demand for Diversity because, well, they are the immensely prestigious Nobel Prizes and so they don’t have to play that way.

But all good things must come to an end. https://t.co/xwTlbK16iY pic.twitter.com/wDgi5XNwvG

So anyone who hates Trump can come forward and become a media darling and maybe get a million dollars in Go Fund Me.

This country is a joke. https://t.co/bxhozExpiO

Whites vs. everyone else

The non-viability of multiculturalism in one chart. #Kavanaugh pic.twitter.com/SGOk6aj96u

Rob Armstrong didn't have any investment experience when he cashed out his retirement savings and bet it all on the cannabis market. The chef, who works at an oil work camp in northern Alberta, invested $37,000 in cannabis companies on the stock market.

"After 18 months, I turned that $37,000 into a million dollars," he told The Current's Anna Maria Tremonti.

Wow. The volatility must be excruciating for the noob.

Pat McKeough, a wealth management adviser, warned that investing in the sector is akin to buying a lottery ticket.

[...] "It's a legalization boom of a plant that's called weed, and for very good reason, it's not hard to grow — teenagers have been doing it for decades."

That's like saying that putting money in a ketchup company is silly because everyone can grow tomatoes. Weed is often not the finished product. It's an ingredient. For example, cannabis firms extract material from the plant, add oil, and make gel capsules for patients in Canada. Soon, many firms will be selling edibles especially cannabis-infused beverages. That requires serious capital, equipment, testing, and time.

How many teenagers are going to compete with that?

Also, before 2020, Germany will likely allow cannabis firms to start cultivating marijuana within her borders. This means that the entire EU market will be open for medical marijuana. That's billions of dollars of annual revenue. If that matures to becoming legal for recreational purposes, then it's tens of billions of dollars.

Time for Canadians to bend over and get that free trade:

Canadian dairy farmers are panning the renegotiated trade pact between Canada, the U.S. and Mexico, saying the deal will undercut the industry by limiting exports and opening up the market to more American products.

[...] the newly minted U.S.-Mexico-Canada Trade Agreement, or USMCA, will grant greater market access to the domestic dairy market and eliminate competitive dairy classes, which the group says will shrink the Canadian industry.

The lobby group says the measures will have “a dramatic impact not only for dairy farmers but for the whole sector,” adding that it fails “to see how this deal can be good for the 220,000 Canadian families that depend on dairy for their livelihood.”

Canadians have been laughing at Trump for his horrible tariffs -- don't you know that free trade is super awesome, you doofus! Now, that the US is opening up the North American market (free trade FTW!), the Canadians are now crying. It's surreal to see so many people pontificate about FREE TRADE while simultaneously support protectionism.

Anyway, it's kind of funny that Canada comes last in the name. Also, every time I see that acronym, my mind starts saying United States Marine Corps Aaaa ...