Don't talk to me!
Aurora in the sky

I've been buying components and building my computers for the last fifteen years. Today, it's very easy for a novice to start the same process because there are amazing YouTubers who share their awesome computer builds. In just a few hours, one can go out, buy the exact same components, and follow along with a video to assemble a new, powerful PC.

For example, take a look at this beautiful build by JayzTwoCents.

Now, let's see what happens when an idiotic, SJW organization hires an ignorant colored clown to build a PC, records the whole thing, and then shares it with the world:

OMG, how progressive and so-not-racist of The Verge to have a Black guy building a PC. So what if he doesn't have a fucking clue about what he's doing. Merit is, like, so racisss!

Here's my breakdown of the ignorance and stupidity in that video:

00:40 Anti-static bracelet? It's magical! He bought it at Saruman's gift shop.

04:34 Did you just install both your RAM sticks right next to each other? That's not how dual channel works. I wouldn't be surprised if the computer doesn't even boot with that setup.

04:39 The graphics card goes in the fastest lane. Period.

05:19 Insulating pads!? Short circuit what!? (Laughs.) Also, let's place the power supply in the case so that the fan is not facing the outside. Give this man a Nobel!

06:18 "Every power supply is going to come with big bag of velcro cables." False.

07:15 Exposed CPU holder, er, slot. The entertainment is off the charts!

07:22 CPU applicator ... WTF? Just match the triangles and just drop the CPU in the socket.

09:05 Does the term cable management mean anything to you?

Here's an image of the final build: 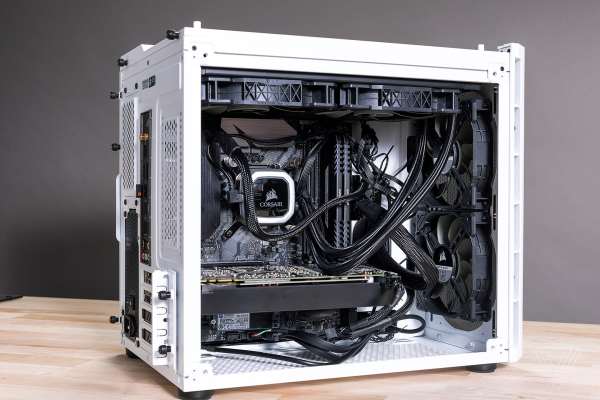 The CPU cooler is missing a screw on the lower left! It's like showcasing a table that only has three legs. Also, for some strange reason, The Verge has disabled comments and we can't see the numbers of likes and dislikes on this epic disaster gaming PC build. Sad!