No reasoning with savages

Muslim protests in India are calling for a boycott of Pampers products after claiming to have seen the word 'Mohammed' in the face of a cartoon cat which appears on its nappies.

One doesn't even have to attempt to offend Muslims to be attacked since they will manufacture fabrications to foment outrage.

Procter and Gamble in a statement that said they would never intend to offend any person or religion and the the design showed 'an innocent animated representation of a cat.'

However, the image on the hygiene product has been branded an 'insult' to Islam by critics, and protesters have staged 'Pampers burnings'. 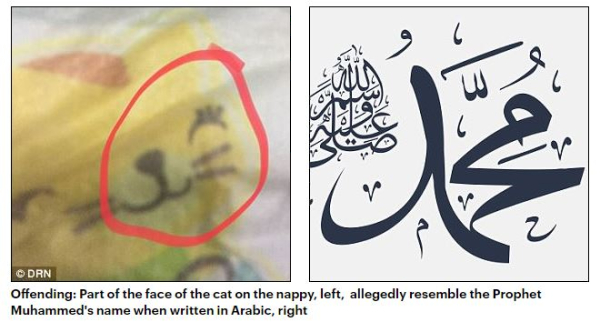 Having studied Arabic, not in a million years would I see the word "Muhammad" in that diaper. But the Islamic Narrative of All Infidels Are Evil must be fed.

What lovely barbarians. Let's open the borders for them.

The Prophet Mohammed, it added, was a 'holy personality in Islam' and the 'disrespect cannot be tolerated'. The letter went on to say: 'Arrest them and punish them.'

Indians made a colossal mistake in 1947. They had an opportunity to kick out every single Muslim but they didn't.