Won't you feel sorry for the cult of death?
Benevolent sexism and racism

Prime Minister Sheikh Hasina has come down hard on critics who have taken issue with her on the statue of Lady Justice at the Supreme Court premises. She has asked why the statue should not be removed.

This is the statue they want to demolish: 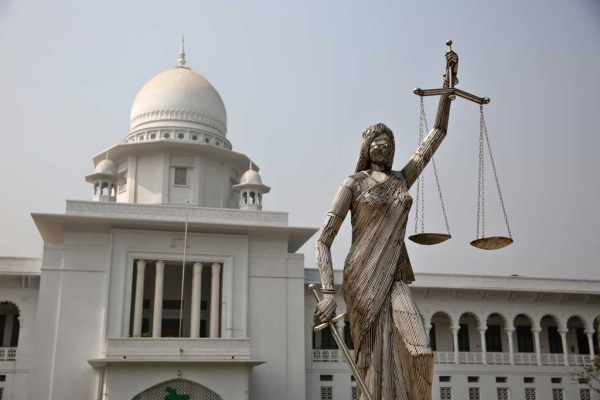 Of course, it's totally haram.

Religious hardliners say the figure, a variation on the Greek goddess Themis but in a sari, goes against Islam. According to them, the statue erected in December 2016, holding the familiar sword and scales of justice in her hands, amounts to idolatry. Hifazat-e Islam, Olama League and several other Islamist organisations have been demanding the removal of the statue.

Don't be fooled into thinking that this demand is limited to a specific statue:

Islamist group Hefazat-e-Islam has demanded the removal of all statues which were installed by the government. The hardline Islamist pressure group first petitioned the prime minister and the chief justice on the issue on February 14, describing the Lady Justice statue erected at the Supreme Court premises as “anti-Islamic.”

Ignore all the horror and atrocities in Islamic lands. What truly matters is the destruction of intricately chiselled rocks.