After a Muslim woman was successful in passing an "Islamophobia motion" in the Canadian parliament, a Muslim woman in Australia is pushing for a more severe law.

An Australian MP has called for tougher speech laws so that it is illegal to offend Muslims because of their religion.

So, does this mean that Muslims in Australia will be punished for their genocidal rhetoric against Jews and Christians? Of course not. The authorities will simply ignore them.

As Heat Street has previously reported, the Australian government is mounting a push to rewrite the legislation so that words must “harass or intimidate” before they become a matter for the courts.

Prime Minister Malcolm Turnbull said the legislation in question – Section 18C of the Racial Discrimination Act – has “lost its credibility” and needs to change.

However, Aly proposes doing the opposite – keeping the lower standard for the law, and adding “religion” to the current list of “race, colour or national or ethnic origin”.

The real purpose here is to go after right wing Nazis white infidels who wish to protect and preserve their civilization. Australia, and the rest of the Western world, needs to stop and then reverse Muslim invasion immigration. Otherwise, there won't be much left of the West a few years down the road. 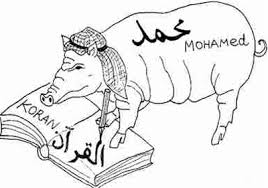