News reports are coming out with the names of the suspects:

According to Radio-Canada and LCN, the two suspects in Sunday’s terror attacks on a mosque in Quebec City are Alexandre Bissonnette and Mohamed Khadir.

Mohamed!? How will the Trump-hating media spin this one?

One of the suspects was arrested at the scene, while a second called 911 himself and was arrested around 9 p.m., just over an hour after the first 911 calls came in at 7:55 p.m., police said Monday morning during a news conference involving the Sûreté du Québec, the Royal Canadian Mounted Police, Quebec City police and Montreal police.

The suspects, men in their late 20s and early 30s, were not known to police and the investigation into a possible motive continues, said superintendent Martin Plante of the RCMP’s C Division.

One of the suspects called 911 and got himself arrested. This is a weird case.

In light of the witness statement that they screamed “Allahu akbar,” it is likely that Bissonnette is a convert to Islam, and that this was, as I suggested last night, a case of Muslims firing upon other Muslims whom they deemed heretical: a Sunni-Shia dispute, or adherents of the Islamic State versus opponents of it, or Sunnis firing upon Ahmadiyya — depending on what kind of mosque it is. But there is no basis at this point for the widespread assumption that this was an “Islamophobic” attack carried out by deranged Trump supporters who wandered north of the border.

It's only a matter of time before one of them unleashes his rage upon the infidels. Will Canadians learn from this lethal preview of what's to come or will they blindly import more followers of evil? 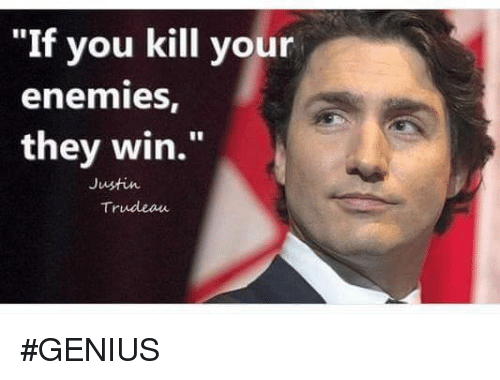 I don't know why the world is so upset over this attack. According to Zoolander logic, those six Muslims who got killed, "won"!

There's going to be a lot more "winning" in Canada.

Update 2
It definitely is a weird case. Now, the Quebec police is stating:

Quebec police are saying there is now only one person suspected in connection with the shooting at a Quebec mosque in the community of Ste-Foy that killed six people and injured 19.

One of the men considered to have carried out the deadly assault that killed six people, is now just a witness to the murders, the Surete du Quebec said in a tweet Monday afternoon.

How can a single gunman be reported as "two or three" gunmen for the initial sixteen hours? How can an eyewitness say that "they" were wearing masks? There is something fishy about all this.