Stay away from crazy
The future king

The state of Islam

A prominent Jordanian writer on Sunday was shot dead in front of the courthouse where he was set to go on trial for sharing a cartoon deemed offensive to Islam.

The cartoon was meant as a parody of ISIS. Of course, ISIS follows Islam. So, by extension, the cartoon unintentionally parodied Islam.

Hattar, 56, was detained in August after sharing a cartoon on Facebook. The caricature depicted a bearded man in heaven, smoking and in bed with two women, asking God to bring him wine and cashews.

Relatives said the cartoon was meant to illustrate what Hattar, a secular Christian, viewed as the twisted religious views of Islamic State extremists. The post was quickly deleted after many angry responses.

"The prime minister was the first one who incited against Nahed when he ordered his arrest and put him on trial for sharing the cartoon, and that ignited the public against him and led to his killing," Saad Hattar said.

The Muslim state arrests the cartoonist and then a true Muslim murders him. Trial unnecessary.

The sad, spineless, submissive pussies in the MSM won't show you the cartoon. I will, thanks to Satiria. The cartoon by Nahed Hattar: 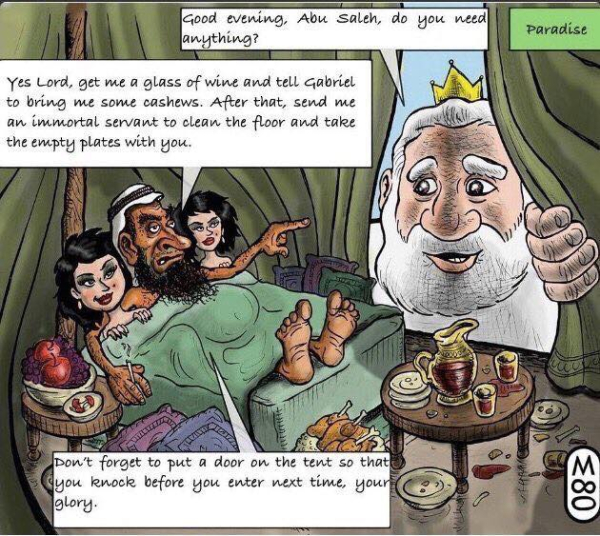