If you haven’t see all the talk about Skittles recently, you may have been off the grid. It appears that Junior took to twitter to voice his opinion on the “Syrian refugee problem” – and it has left definitely left me contemplating whether ignorance is a gene passed on through birth in the Trump family.

What is this Muslima blabbing about? She is referring to the image posted by Trump Jr. a few days ago. Take a look: 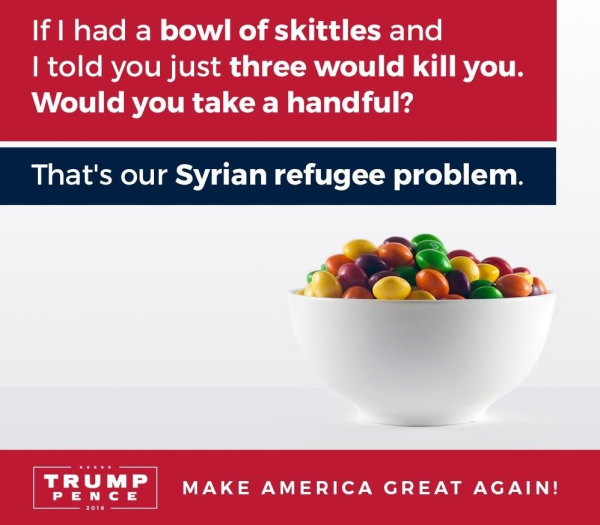 Here's how the Muslim girl responds:

Yes, the worth of a Syrian refugee has apparently come down to a pack of artificially fruit flavored candies that could potentially increase your chances of getting diabetes.

(Laughs.) It gets better:

“If I had a bowl of skittles and told you just three would kill you…” is not a complete sentence! Common sense would define it as a dependent clause, which means that in the English language, a statement like that can not stand alone without a predicate to complete the thought.

Next, you don’t need to be a math prodigy to understand why eyebrows would be raised when noticing that the calculations in that meme are completely inaccurate. The number of Syrian refugees far exceeds the capacity of the amount of Skittles that can be held in a bowl.

This image is for the poor, Muslim girl:

Of course, no Muslim op-ed would be complete without a sleight of hand.

While the Trump family can continue being notorious for being hypocritical on rejecting immigrants into this country (as they are descendants of immigrants; and Donald Trump is married to one), the rest of us can focus on the economic benefits for this country that they would bring.

Did you notice? Trump Jr. specifically talked about Syrian refugees. Iman, bless her lying heart, twists it around to talk about rejecting "immigrants".

In a nutshell, accepting more immigrants into the America could potentially increase the housing economy by $68 billion, increase the economy by 4.8% over the next 20 years [...]

The only economic case for immigration is a tautology, which is because the definition of GDP means that GDP will increase with population growth, so any increase in population for any reason, up to and including alien invasion and occupation, will be "economically beneficial" so long as "beneficial" is defined as being "a larger GDP number".

Also, France and Germany have been on the receiving end of the "economic benefits" of migrants over the past year. So much so, that the people will soon vote in explicit anti-immigration politicians. Better late than never.