The lizard overheats
Free Zyklon B

The Enemies of Western Civilization

August 1990: Saddam Hussein invaded Kuwait. Inadvertently, some of his forces easily took over some territory of Saudi Arabia. Some thought that Hussein would eventually gobble up Arabia as well. The US formed the largest coalition since World War II to repel Hussein.

January 1991: Hussein's Iraq was firing Scud missiles into Saudi Arabia. Many missed their military targets and demolished civilian infrastructure instead. Many in Arabia feared that chemical weapons would be used against them by the madman in Baghdad. Civilians were provided with gas masks.

February 1991: The US air force and later the hundreds of thousands of ground troops liberated Kuwait and saved the Middle East -- especially the Arabs living in the land of Saud.

Late 1990s: Many shops in Saudi Arabia had small plastic donation boxes. I asked my dad about their purpose. He told me that the money went to the mujaheddin in Afghanistan. Arabs were freely supporting al-Qaeda.

December 2001: My father worked in Saudi Aramco. I talked to him about the mood at his office right after 9/11. He told me that the Arabs were celebrating like they had won the Football World Cup. Every one was jubilant with one exception. There was one Arab who was not satisfied. My dad went up to him and inquired about his grief. He was looking at the photos and the videos of the collapsing Twin Towers. He said that the towers fell straight down. He was despondent because he hoped that they had fallen on their side. He wished that there had been more death and carnage.

Just a decade after the United States had saved these very people and their families from possible death, slavery and mutilation, they were cheering at, what at the time was thought, the annihilation of 10,000 innocent American civilians.

There were reports of certain people celebrating around the US right after 9/11. I met these sorts of people at my university in Canada. I have had conversations with people who openly and proudly supported the Taliban. Wicked glee would be an appropriate term for their reaction to the slaughter of almost 3,000 Americans. What do all of them have in common? Islam.

Muslims are nourished on poison. They are told to hate the unbeliever, the infidel, the kafir. Such has been the case since the evil Muhammad inflicted his cult on the world. That Jew-murdering, slave-owning, paedophile is the role model for over a fifth of humanity. It would be a very confusing world if the Muslims weren't at war with us.

Islam is utterly incompatible with Western Civilization. One simply has to look at the rules and laws of Sunni Arabia and Shia Iran and compare them to the legal books of any Western country. The best thing we can do is to put as much distance as we can between us and them.

Ban Muslim immigration. Burn ISIS. Make it clear to any Islamic organization that even mildly instigates against us: you will be crushed.

Why is it that we haven't taken such simple steps to protect ourselves? Islam is the main enemy. But before we get to dealing with it, we have to face the internal foes. The main enablers: the universities, the mainstream media and the leftist politicians.

All of them have a favorite saying about Islam: 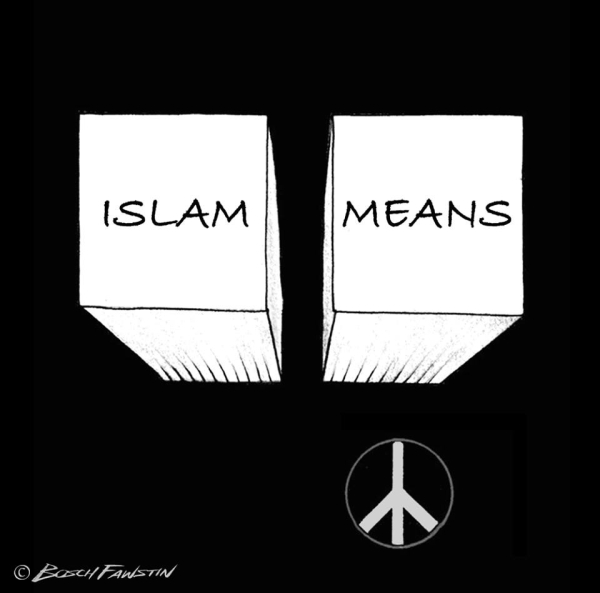 Obama thinks that we can absorb another terrorist attack. Obama handed the Islamic terrorist regime of Iran hundreds of millions of dollars. Infidels around the world will pay for that later. He glosses over the slaughter of Christians and imports hundreds of thousands of Muslims into America.

Hillary lets Americans die in Libya. She accepts millions of dollars from the Saudis. The hypocrisy can make one faint.

The very people who're supposed to defend the United States, defend its eternal enemy. They refuse to mention ISIS. They make it deeply unfashionable to call out the evil of Islam. Truth is hate speech.

The moral depravity is not limited to them. Dumb Jews want to be friends with Muslims. Homosexuals march in support of Islam. Feminists are totally cool with the garbage bag burqa.

It was not always so. We had leadership.

How dreadful are the curses which Mohammedanism lays on its votaries! Besides the fanatical frenzy, which is as dangerous in a man as hydrophobia in a dog, there is this fearful fatalistic apathy [...] The fact that in Mohammedan law every woman must belong to some man as his absolute property—either as a child, a wife, or a concubine—must delay the final extinction of slavery until the faith of Islam has ceased to be a great power among men.

All is not lost.

After the Brussels attack, the head of Poland's largest party announced that "after recent events connected with acts of terror, [Poland] will not accept refugees, because there is no mechanism that would ensure security."

Victor Orban, Prime Minister of Hungary, declared that "we do not like the consequences of having a large number of Muslim communities that we see in other countries, and I do not see any reason for anyone else to force us to create ways of living together in Hungary that we do not want to see...."

Robert Fico, Prime Minister of Slovakia, announced that "Islam has no place in Slovakia."

The Czech Republic, which had in the past taken in a few thousand Muslim migrants, regrets even that, to judge by the remark of its President, Milos Zeman, this January, that "it is practically impossible to integrate Islam into Europe," and made clear that the Czechs will not be taking any more.

We are in another battle in the Longest War. As long as we tell the truth about Islam, unmask the enablers and support those who fight -- Trump, the Alt Right and the Nationalists -- we shall win.