Jing cobbled together a 10 per cent deposit on the $560,000 property by borrowing from her parents in China. She said they in turn borrowed money from friends and family.

This was a big mistake by Jing. She cobbled together a) all her money, b) savings of her parents, and c) cash from friends. Of course, what the moronic government in British Columbia did next made things much worse:

But last month, 12 days after Jing signed the purchase contract, the B.C. government threw a wrench in Jing's Canadian dream when it levied a 15 per cent property transfer tax on foreign real estate buyers in the Vancouver area.

Jing is not a permanent resident in Canada, so the tax adds $84,000 to the home's cost, something she's certain she can't afford. But if she backs out of the deal, she would lose her deposit of about $56,000.

It doesn't matter who you are; a Canadian or a foreigner. Putting all your money in real estate is a huge risk. Jing, fresh out of university, with no income stream now has ugly losses in front of her.

Anyway, this property transfer tax on foreign buyers, introduced in late July 2016, is quite puzzling. Take a look at this graph (from Garth Turner): 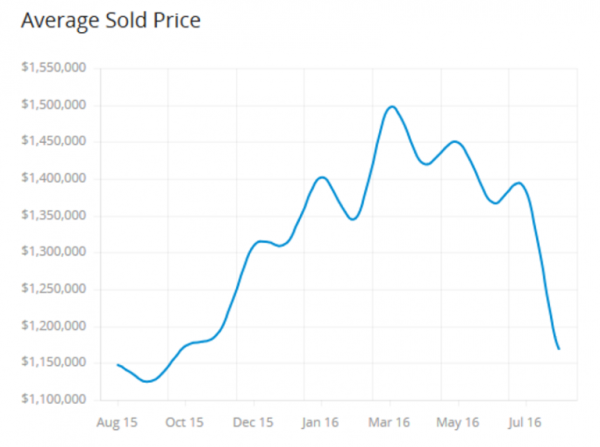 The average detached house price in Vancouver in March 2016: $1.5 million.

The average detached house price in Vancouver in July 2016: $1.15 million.

That's a stunning 23% crash in just four months! So, why did the B.C. government introduce this dumb tax? Because politics. They have got to show the economically and financially ignorant voters that they're doing something!

Jing doesn't have a vote. So, screw you Jing!