Can you feel the peace?

I’ve previously wondered what horrors I might uncover were I able to see what the Arabic speaking world were saying about atheists on Twitter. Well, thanks to the good work of Twitter user @Ahmedaa1k, I need wonder no more. And it’s not good news. Please note, Ahmed is not the individual making these statements, but the one translating them. Here are some Arabic responses to the hash tag ‘atheism is not a crime’.

Over a decade ago, this wouldn't have been possible. Now, with the advent of smartphones and cheap bandwidth, we all get to see the ugly truth about the average Muslim in the Arab world. Here is just one sample: 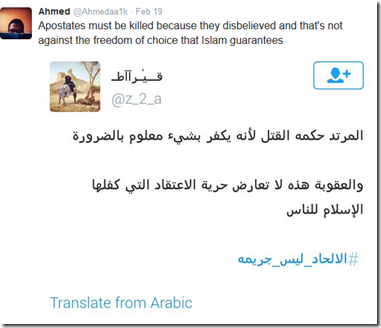 So eloquently self-contradictory and evil.