The Longest War
The Cult of Death

The outrage is outrageous

A private taxi firm has sparked outrage over a ‘sexist’ advert that has attracted a wave of complaints.

OUTRAGE! Over what? This: 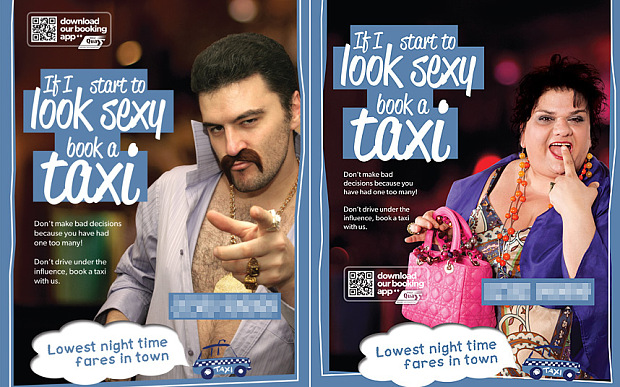 If anything, the ad is quite clever. But let's see what's so offensive about the above image:

"It's disgusting that in 2015 sexism is alive and well in Southampton, enough for it to be an acceptable ad campaign, especially in the New Year when companies too often try to make a profit over negative self body image."

I didn't expect anything less from a brain-dead feminist. The ad makes fun of a oh-so-cool clown and a land whale. Yes, they're both not sexy.  The company should not back down.

"We apologise for any offence that may have been caused by either of the posters,” manager Lee Haynes told The Tab.

Idiots! Never apologize. It only makes you look weak.

"Of the 22 staff employed with the company, 16 are female and we have a diverse range of ethnicity, religion, and sexual orientation within that group."

Did that buy you any mercy? The feminazis don't care. They'll pummel your business because you said that "fat isn't sexy" which is basically attacking 99% of feminists.