Earlier this year OCZ announced its intention to bring a new high speed SSD interface to the market. Frustrated with the slow progress of SATA interface speeds, OCZ wanted to introduce an interface that would allow greater performance scaling today. Dubbed the High Speed Data Link (HSDL), OCZ’s new interface delivers 2 - 4GB/s (that’s right, gigabytes) of aggregate bandwidth to a single SSD. It’s an absolutely absurd amount of bandwidth, definitely more than a single controller can feed today - which is why the first SSD to support it will be a multi-controller device with internal RAID.

I wonder if this will compete against the upcoming Light Peak connection standard from Intel. If so, good; more competition for Intel is always welcome.

Another doofus via Samizdata:

“Vampire Diaries” star Ian Somerhalder, an outspoken critic of the BP oil spill in the Gulf, appeared at Thursday’s Washington Post Live conference on energy policy in the nation’s capital.

Are there are any outspoken supporters of the BP oil spill out there?

The very essence of awesomeness: The One can shoot rainbows.

Given his sinking popularity, one commenter there writes:

Having Obama campaign for you is like having someone throw you an anchor when you’re drowning.

That's how you bend the cost curve.

Vote for Obama, Get Anchored!

"I am really sorry for what happened, but I think even if I'm in the same situation now after this experience and she does the same thing, I would kill her again."

An Electrician in Israel

Is Nice. Very nice. The second last black and white is perfect.

This is hard to believe:

The book describes Mrs Obama as "the only one in (Mrs Bruni-Sarkozy's) eyes able to dispute the title of the planet's sexiest and most glamorous first lady".

The Tokyo Cut, for some reason, reminded me of Charlie and the Chocolate Factory.

The UK's tax collection agency is putting forth a proposal that all employers send employee paychecks to the government, after which the government would deduct what it deems as the appropriate tax and pay the employees by bank transfer.

The good slaves will get the best rates.

How Misery is Created

the picture changes in 2013. Under the healthcare law adopted in March, the Medicare tax will rise that year, from 2.9 to 3.8 percent. Also, a new 3.8 percent tax, called the Unearned Income Medicare Contribution (UIMC), will be imposed on high-income taxpayers’ interest income and most of their pass-through business income that’s not subject to Medicare tax. So, under the president’s proposal, virtually all of top earners’ ordinary income will be taxed at 44.6 percent, starting in 2013. We’re not just going back to the Clinton-era rates of 40.8 and 43.7 percent.

Such is the atrocious cost of "free" health care.

It's All A CONSPIRACY!

Oh, I've been waiting for this word to pop up with the recent Pakistan cricket spot fixing allegations.

There always has been, there is right now, and there always will be a conspiracy against the oh-so-innocent Pakistanis. Sometimes it's the Jews and sometimes it's Englishmen -- their former masters. But we can be sure that it's some bloody infidels who just won't leave those peaceful Pakistanis alone!

So, finally the word was vomited out. What is stunning is the fact that the chairman of the cricket board in Pakistan is spouting this nonsense.

In an extraordinary outburst, PCB chairman Ijaz Butt has pointed a finger at the English cricketers for their role in the batting collapse that cost England the ODI at Oval and said the board was investigating a conspiracy, involving "august cricket bodies", to defraud Pakistan and Pakistan cricket.

Let's get this straight:

The only cricket board that has financially helped Pakistan gets told that it's players are rotten cheaters by the top cricket official in Pakistan. Yet, they have done absolutely nothing to invite such animosity!

If the darkest day in Pakistan's cricket actually does come, and talk of giving Pakistan a temporary break becomes reality, it will not be the result of any conspiracy. It will be the result of the worst administration ever to have run cricket in this land.

You can't go wrong with Aviator style sunglasses and a photographer who knows what he's doing.

A PLAN to force families to cover up to avoid offending Muslims at a public event has triggered furious debate.

This is happening in Australia.

A spokeswoman for the City of Greater Dandenong said the ban would help Muslims feel part of the community.

Yeah, restricting the rights of others sure does make them feel better. What's next? Alcohol-free nights at bars?

Hate is their Nourishment

Al Jazeera and others, for example, have cultivated the notion that 9/11 was a CIA plot in which 3,000 Jews were told to stay home -- and was launched a pretense for the U.S. invasions of Afghanistan and Iraq. (Traveling in Egypt late last year, I heard this myth repeated numerous times.) Holocaust denials have picked up new steam, particularly after being spurred on by Iranian President Mahmoud Ahmadinejad.

Too many Westerners have a hard time understanding this awful reality: The narrative in the Islamic world is that the Muslims are oh-so-innocent victims and that the nefarious, sons of dogs!, Jews are plotting their destruction with the help of those nasty Jew-loving (eww) Americans.

That sounds atrocious but it's true. That line of, er, thinking is common in the Muslim world. One hears the countless conspiracies in the media, mosques and in regular conversations with friends and relatives in that part of the world. I was lucky to have had the opportunity to study and live in North America where I slowly and clearly realized just how utterly insane Islam is and just how psychotic its true followers can be.

I think it will be one of the most useful technological items to make its debut next year. An excerpt:

At the far left on the TV was the total bitrate of the storage system, which showed a solid 768.8 megabytes/s of throughput. That's 6.15 gigabits per second of throughput.

Most people are currently stuck with USB 2 which offers a throughput of roughly 30 megabytes per second. That was awesome ten years ago but now it's simply very slow. Light Peak can't come soon enough.

Unfortunately, one will have to upgrade the motherboard to make use of Light Peak. So, it'll be many years before this becomes mainstream.

Damn! FPS games have come a long way since the days of Doom and Quake.

The new AF-S NIKKOR 35mm f/1.4G is an update of one of Nikon’s most respected and popular NIKKOR lenses and combines a natural yet versatile 35mm perspective with an ultra-fast f/1.4 aperture. The f/1.4 maximum aperture allows photographers to shoot handheld in low light and provides dramatic separation between subject and a softened background – particularly useful when shooting environmental portraits, weddings, architecture, travel and photo journalism.

Let there be no confusion. I like the baker's kilobyte the most.

One Connection To Rule Them All

EPB Fiber Optics (Chattanooga's municipally-owned fiber-to-the-premises network) and Alcatel-Lucent have teamed up to offer America's "fastest" home broadband service -- a service that brings 1Gbps (or 1000Mbps, if that strikes you better) directly to your PC. Best of all, the service is actually on sale starting today, and every single home and business within EPB's 600 square-mile, nine-county service area will be able to access the network.

The $350 per month price is reasonable considering that this type of epic broadband will likely be shared among a group. For seven people it's a cheap $50-a-month rate.

I certainly would not mind that arrangement. Not at all.

WHILE an American preacher placed himself at the centre of an international storm by threatening to burn copies of the Koran over the weekend, a University of Queensland academic has posted an internet video of himself using a page from the Muslim holy book to roll and smoke what appears to be a joint.

Any time Gregory Heisler gives one of his iconic photos the BTS treatment we pretty much pre-empt the regular programming and turn the joint over to him. And his photo of NYC mayor Rudy Giuliani for the 2001 Time Magazine Person of the Year cover certainly qualifies.

Go there and see how much planning went into one photo.

"The Rest of the World Hears You"

For that first year, I had not followed George Bush’s presidency closely, and knew little of him or of his prior tenure in Texas. But three days later when he stood at Ground Zero, put his arm around that noble-looking retired fireman Bob Beckwith, grabbed a bullhorn, and extemporaneously announced to the crowd, “I can hear you, the rest of the world hears you, and the people who knocked these buildings down will hear all of us soon,” I thought, 'I'm relieved this guy, at this moment, is president.'

I've never before seen Batman look so radiant and colorful.

As the first child born to a sitting president in nearly 80 years, John F. Kennedy Jnr enjoyed a national spotlight throughout his life. He was in utero during his dad’s campaign, and grew up in the White House. The photo of John Jr. peering out from the panel which he called ‘the secret door’ under the desk (‘my house’ to John Jnr) as his father reviews the papers was an instant icon — both for its timing and composition.

Its cuteness cannot be denied.

Why can't they be just quiet?

Photoshop: Return of the Burqa

I showcased the picture below five years ago. 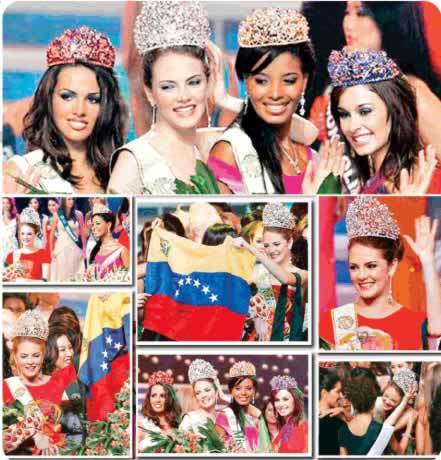 Look closely, you'll notice that the beauties have magic clothes on their bodies -- thanks to the editors of a Pakistani weekly magazine.

Now comes a hilarious example from the belly of the beast itself: the land of Saud. Ladies and gentlemen, it's the never before seen (and never ever shot!) photos of Mariah Carey.

My personal favorite is the uber-fluffy, er, cat.

Oh I wish I had a camera when I was in Saudi Arabia. I could have made an encyclopedia of photoshopped burqas.

The master of HDR presents a color-rich photo from Disneyland. If you look carefully, you'll see a few "ghosts" because of the low aperture.

Bus of the Decade

A flame spouting school bus sporting a Phantom jet engine has been clocked at 367 mph.

"Pakistan is threatening my border!"

A great action movie is turned into a musical.

There is really no excuse for failing to feel liberal guilt about global warming. No excuse. It is a fact that our affluent lifestyles are endangering the planet, to some maddeningly unknown degree. What is wrong with someone who is not made uneasy by this? What is wrong with someone who affects (or, worse, genuinely feels) indifference to this fact, and sneers at the muddled, hesitant, hypocritical responses of the conscience-pricked rest of us? Of course we don't know if cutting down on meat will really help things, and make future flooding of distant lands less likely. But those farting cows are a problem, and maybe one should sponsor slightly fewer of them.

No way! What the world needs is more delicious, preferably BBQ-ed, meat.

After reading this nonsense about less meat, less material, less consumption for many years, I now feel extra giddy when I cut a steak, buy computer hardware, or spend sizable amounts of cash. It's like libertarian euphoria -- the healthy opposite of liberal guilt.

The parents of so-called "honour killing" victim Shafilea Ahmed have been arrested on suspicion of her murder, police sources have said.

Shafilea went missing from her home in Warrington in September 2003, aged 17. Her decomposed body was found in the River Kent in Cumbria in January 2004.

Can one imagine a more painful event for a parent than to see a child die? The answer is yes for these Muslims. To them, it would have been far more inconvenient if their daughter had refused to marry one of her cousins.

How can you not cringe?