The Land of the Pure
Intel Realizes the Mistake

On Wednesday, Barak Obama pledged that he would ignore Al-Qaeda in Iraq but would invade US ally Pakistan to hunt down members of the terror organization.

On Friday, Pakistanis took to the streets to protest Obama's invasion threats. Of course, US flags were also torched.

Such open, wretched behavior is not found in the West. Can you imagine Americans burning the flag of Saudi Arabia for 9/11 or lighting up the Quran to protest the evil spewed out by Al Qaeda and their cohorts?

Furthermore, have you ever heard of a Westerner who objects to someone's words by wishing death upon his/her nation?

Just take a look at this AP photo. I've marked it: 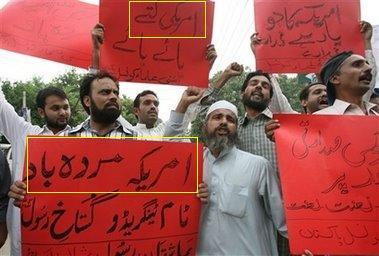 The enclosed text at the top says, "American dogs".

At the bottom we have, "Death to America".

I think the text at the top right says something racist but I'm not 100% sure.