The Ultimate Insult
Nourished on Poison

The Depravity of Sharia

Other Africas was on exhibit at the University Museum of Southern Illinois University from January 15 to April 21, 2002.

After some clicks we get this:

While Southern Nigeria is largely Christian, The Northern states are predominantly Muslim. In October of 1999, the governor of the northwestern state of Zamfara, Alhaji Ahmed Sani adopted Sharia law. He banned prostitution and the selling and drinking of alcohol. He also encouraged men to grow beards and demanded the segregation of men and women in public transportation system. In this poster, the rules and of Sharia law are laid out on the left hand side and on the right are the consequences for breaking these rules.

The punishment for women who dare ride a bike with a man: 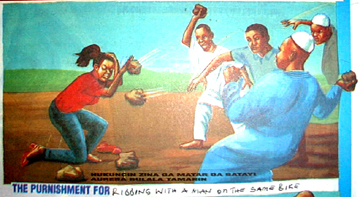 Can you feel the peace?