Unhinged
It Is Forbidden!

Pro-government and opposition groups traded accusations Sunday over who was to blame for the worst political violence to grip Pakistan in years, as the toll from a day of gunbattles and rioting in Karachi rose to 36 dead and more than 150 wounded.

A nation with nuclear weapons is reduced to this:

Newspaper editorials on Sunday lamented the descent into chaos and violence. "It appeared at times as if there was no government in Karachi and it was gunmen who ruled the nation's biggest city," said the respected Dawn daily. 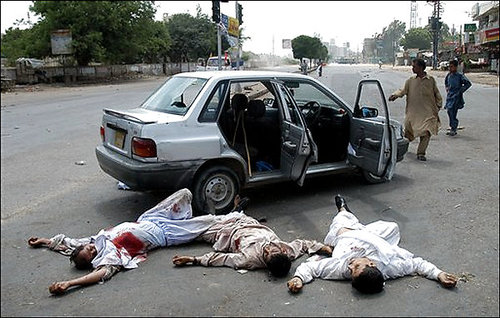 Dead bodies, blocked roads, burnt vehicles, bullet marks on buildings, gun-shots; This was what we all witnessed happening in Karachi throughout the day, real and live on TV.

Pakistan has yet to have a democratic transfer of power from one elected government to another. Death and chaos have ruled for a long and depressing 60 years -- a theme which, sadly, has no intention of disappearing in the foreseeable future.

A Pakistani opposition supporter was killed in Karachi on Sunday during a protest against violence the previous day in which 34 people were killed in clashes between pro-government and opposition activists.

Who's going to take over if Musharraf falls?