The Depravity of Sharia
Haramzilla

I attended this Pakistani school in Saudi Arabia for 10 years. I've written about my lovely experience there:

Corporal punishment was the result for not doing the work. I never had a single teacher who didn’t hit the students. The punishments varied from different teachers. Some would institute punishments for failing tests. Some used their hands while others preferred to use long and heavy wooden sticks. On many a day I went home with red and swollen palms.

I also mentioned this terrifying incident:

The teacher started to slap and punch him on the neck and the back with each hit more forceful than the last. The kid sitting next to the student got up from the desk and stepped away. The teacher kept on brutally beating the student. The student started crying and fell to the ground within the desk. The teacher grabbed the front of the desk with his left hand and the back with his right. He then started to kick the bawling student. He kicked him for about 20 seconds. He then went to his desk while swearing. No-one said a word.

His pleas made no difference. Our English teacher had a vise-like grip on the left wrist of that student. A few days before we had a brief English test. That student got 5 out of 10. Like everybody else, he had to get the signature of one of his parents. Which he did, after he had changed that "5" to an "8". Now, the student was fruitlessly attempting to avoid the customary thrashing.

The teacher held the wrist of the student with his left hand and with his right hit the student multiple times; on the head, the face, the neck, a few punches on the ribs. I sat in front of the class, a few feet away from the entire revolting episode.

There is a rigorous, perhaps even cruel, system in place; and when it comes to discipline, the stories are awful. One mother (whose sons now attends our Madrasah) relates how teachers would literally beat the kids senseless for the most trivial of errors – stumbling over the pronounciation of Qur’an would merit being boxed in the ears; students would be screamed at rather than spoken to; major discipline came in the form of being whipped by belts until they bled – first by the teacher, and then by fellow students. Their injuries were not attended to, so much so that severe infections were contracted and they became so sick they couldn’t move. The son who now attends our Madrasah still bears scars from his ordeal.

How such memories impact an innocent soul:

Mental abuse was also common; another mother said that for months after her son came back home, he would flinch, cringe and shake if anyone spoke to him in a slightly raised tone of voice, and he would cry when made to read or recite Qur’an – such was the result of his ‘Islamic education’.

You see, the Religion of PeaceTM is beaten into the young Muslims.

What steps did the local umma take to deal with this matter?

Now, this school was actually under investigation by the government after some people reported them, but apparently the charges were later dropped, reasons unknown (but guessed at).

When I asked my dad why someone would drop these charges if they knew them to be correct and not to be lies, he said that it was a pretty big issue, that it was a matter of getting fellow Muslims into trouble, causing more problems and fitnah in the community. He said that if the media got involved, they’d just use it as another excuse to show how bad Muslims are.

Of course. How utterly irresponsible to suggest that there's anything wretched about Muslims who generously hit, beat, whip and torture kids.

What utter perversity. These monsters of madrassas have obliterated the minds of countless children and the main concern of these heinous Muslims is to shield the evil teachers!

Non-Muslims have to ask themselves: When most of the umma treats its own offspring with such an abhorrent passion, then what is in store for those whom the Muslims hate?

Poor little Nihad. She must learn not to step on the Holy man's carpet while he is praying.

Otherwise, the Holy man might get a little vexed: 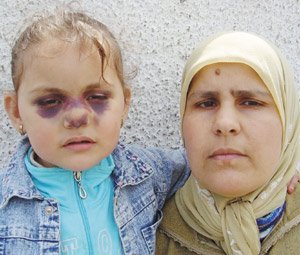 I attended this Pakistani school in Saudi Arabia for 10 years.

Aren't you revealing a little much? One of your classmates could figure out who you are.

The question I would ask is whether abuse is precisely the spirit of Islam - which is to say that of Mohammad - rather than an aberration.

I would suggest that Mohammad was a man who had no compassion whatsoever and no wisdom either. Thus following his path has never improved the way people others, and if one looks outside of Muslim culture, one can find much better examples than Mohammad and thus find life that is much less cruel and painful.

er, I meant to type
"Thus following his path has never improved the way people treat others..."

People have it exactly backwards when they try to avoid publicity and public condemnation of the problem.

If you solve this problem without public awareness, then you’ve only solved it for your own child if that. The problem will come back, unless there is public pressure to keep the institution running well.

Embarrassment isn’t your enemy, it’s a tool that you use.

The absurd result of worrying about “the reputation the ummah” is that only kafir can solve their problems and thus the the ummah get a reputation for being too backward to solve it’s problems.

In places where the Catholic church had problems with sexual and physical abuse of children (and, going back a bit to Ireland - the virtual enslavement of unwed mothers in the Magdalene Laundries, there always seems to be the same reaction: "How dare anyone embarrass the Church!?!" Fortunately the Catholics and other denominations with similar scandals did not have the ability to wield death and terror against their own and outsiders the way that Islam does (at least not since we clipped their wings several centuries back)

Children in Western countries are routinely removed from their parents for far less abusive treatment than this yet an institution pretending to be a school can beat kids nearly unconscious and no one so much as asks for an investigation. Separate legal systems for different groups is nasty and will not end well.

David: "One of your classmates could figure out who you are."

Everybody from that school had to go abroad for further studies. So that pool is huge. I think there are about 2-3 classmates of mine who'd recognize who I'm if they read the posts here that deal with my background history.

The thread at Muslim Matters has devolved into an argument over whether it's OK to beat your wife or beat a slave.

Josh Scholar: It's the usual route these debates take. The scary thing is that these are supposedly educated Muslims. (The fact that they can speak and write English is a good indication of that.) Imagine what the illiterate and retrograde Muslims think about such issues.

I linked to an MSNBC story earlier this month which now seems to have disappeared. The article described a Muslim man in America who had married a Pakistani woman -- she was abused. Somehow, the cops found out about it and took her away from him. They later asked her, "Why didn't you contact the police?" She basically replied, "In Pakistan, the police simply bring back the battered women to their homes and leave them to the mercy of their ... husbands."

Muslim men have religious and institutional backing to do whatever they want with their women. One finds the logical conclusion of this in Saudi Arabia: a man (dad, brother, uncle or husband) practically owns the woman -- she cannot study, work or travel without his written permission.

So, it's not shocking to see Muslims talk about the merits and demerits of a specific way of treating a slave; rather than the fact that slavery itself is viciously immoral.

I can't tell whether the guy who asked that question is a Muslim or a someone fishing to make Muslims sound bad.

His first question sounded like a provocateur, but his second one sounded pious so I can't tell. Anyway someone took the bait.

Anyway I guess the subtext is "if we stop beating children, can still be thugs?"

Hey, they mentioned you on the thread.

MHO, it is much better to shut such a school than to cause psychological and even health scars on the lives of children. Perhaps if we leave them like this, a few of them may turn out like our friend Isaac Schrödinger, the never-was-really-a-Muslim-qadiani-apostate who has linked to this post to show how ‘bad’ our madrassas are. I guess Columbine must have been a great place since no Muslims ran it.

They can't hold back the ugliness.

"In Pakistan, the police simply bring back the battered women to their homes and leave them to the mercy of their ... husbands."

I seem to remember a TV show years ago - in Iran they throw the women (sometimes just girls) in jail for trying to escape their husbands.