I'm Above Average!
Too Much

Observe, a billboard in Pakistan: 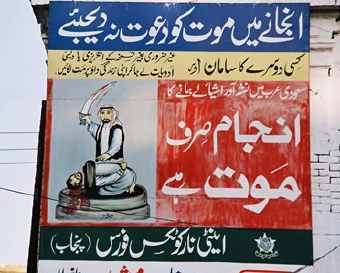 It's an ad targeted at those who wish to perform the Haj; made by the Anti-Narcotics Force (Punjab); basically says that the punishment for taking drugs to Saudi Arabia is death.

The big text on the middle-right says, "Injaam sirf maut hai"...The result is only death.

By the way, alcoholic beverages are considered "a drug" in Saudi Arabia.