Going Down in History

Turkey’s nationalist paper Vatan quoted Salih Kapusuz, head of the ruling Justice and Development Party’s parliamentary group as saying: “The mentality of the Crusades has returned.

“(Benedict) will go down in history in the same category as leaders such as Hitler and Mussolini.”

That opinion brought to you by a nation that continues to deny the Armenian Genocide.

Another thing: Have you noticed just how easily infidels are labelled as Nazis or fascists? The Muslim world is littered with groups and individuals who almost daily reiterate their desire to murder Jews, yet somehow those true heirs of the Nazis escape condemnation.

Something is rotten in modern Turkey.

Michelle Malkin showcases a mature response from the Ummah: 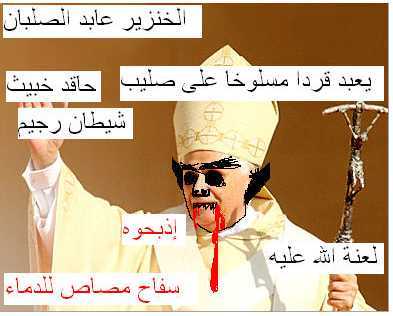 Do read the comment below to see the affectionate English translations courtesy of Muslihoon.

Translation of what the picture says:

لعنة الله عليه
May the curse of God be upon him

Thanks. I got the part about the "curse of Allah", "accursed devil", and I could see that the "cross" (Sul-abe) was mentioned but the rest I couldn't get.

I linked to your article from The Pope and Disproportionate Response, but looks like typepad is having trackback issues.