The Depravity of Sharia 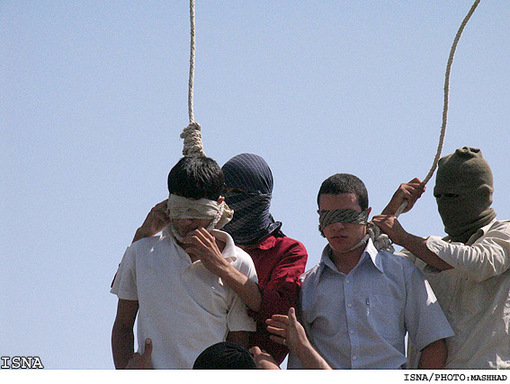 The Iranian Students News Agency reports that the executions took place on July 19 in the northeastern city of Mashhad.

One teen, ISNA says was 18, the other was a minor, believed to be 16 or 17. The organization ran a picture of what it said was the execution on its Web site.

The English language Iran In Focus also reported the executions, saying the teens were hanged in public in the city square. It quotes sources as saying the teens were executed for having sex with another minor but this could not be confirmed. The report does not name the victim. Under Sharia law the victim of a sexual assault must also be executed.

Both news services say that prior to their execution, the teenagers were held in prison for 14 months, severely beaten and given the lash 228 times.

A report of the executions was also carried on the website of the respected democratic opposition movement, The National Council of Resistance Of Iran.

A group in Britain speaks out against this atrocity:

The British LGBT rights group OutRage has called for sanctions against Iran. The organization has called for western states to break off diplomatic relations, impose trade sanctions and treat Iran as "a pariah state".

"This is just the latest barbarity by the Islamo-fascists in Iran,” said OutRage spokesperson Peter Tatchell.

"According to Iranian human rights campaigners, over 4,000 lesbians and gay men have been executed since the Ayatollahs seized power in 1979. "Altogether, an estimated 100,000 Iranians have been put to death over the last 26 years of clerical rule. The victims include women who have sex outside of marriage and political opponents of the Islamist government.

Direland and Port McClellan have also linked to the story.

Can you confirm the veracity of this? If so, this is a huge story. Please email me if you can.

the whole thing is shocking, the worst aspect is the tv reporter trying to inteview the boys on the way to the gallows who are clearly in hysterics and totally terified at the prospect of imminent death,even worse the crowd apparently egging the executioners on, there is an inherent madness here, that we in the west left behind about 300 years ago,the one redeeming moment , the boys seemed to have steadied them selves for execution and died with some dignity which is more than you can say for any one else concerned with this abomination- if isna has more photos of this they should be published to ram home exactly what sort of regime were dealing with here

This is the most horrible thing I've ever seen since 9/11. I wish we could do something. It can be possible that we are at home having a good time when is such a ignorant people killing because theirs belief. Killing somebody it's a crime and I'm againts it. Gay people like us has the right to love just like eveybody else without been punish. It makes me sick how ignorant and stupid is the Iran goverment. The United States should do something about this bullshite

It's these young men's choice and their life... who are you to hang them? Are you Allah? Is it written anywhere in the Quran? Because of these stupid extremists, people are getting wrong message about islam and Quran...

Where's the humanity? And the two Iranian regimes covered their face... why???? What are they scared of????