The caption of a ricksha art photo:

Jihad images from Comilla town (near Chittagong), spring 2004. Photo by Kazi Huq, He reported that these Jihad images are all over town.

Here's another caption of a ricksha art photo:

Bin Laden Jihad image on backboard of Comilla ricksha, Spring 2004. Photo by Kazi Huq. The popularity of such images in the pious town of Comilla is evidence of growing Islamism in Bangladesh.

The photo from the previous link was displayed at this post titled 'Islamism in Bangladesh'. Israelpundit showed the photo with the same title.

Yet, Rezwan refers to Israelpundit's post as a typical Bangladesh bashing. It isn't. We're bashing Islamism. It just so happens that this ricksha art was from Bangladesh. I wouldn't be surprised to see the same, ahem, art in Pakistan.

View the entire gallery. It doesn't bode well for a society when the photos of actors, actresses, and landmarks are displayed alongside with a mass murderer and an Islamist terrorist. Let's take a look at this photo (caption mentioned above): 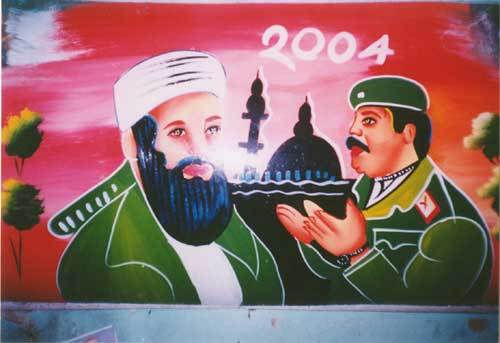 Who but an Islamist would find this kosher? The two monsters are shown as Islamic heroes. Note the mosque in the background and Saddam's open palms in prayer/dua. I think that a sizable number of Bangladeshis, dare I say a majority, view Osama and Saddam as victims of the US rather than as perpetrators of terror.

Rezwan might well know hundreds of Bangladeshis who are not Islamist but that doesn't change the fact that there is an ever-present influence of Islamism in Bangladesh.

For example, read this article on the torching of an Ahmadiyya mosque in Bangladesh. The article presents sane, non-Islamist, views from Bangladesh as well.

You have to see things in the perspective (see my comments in the Israel pundits post). First of all there is not an "ever present" influence on Bangladesh. In fact Islamist organizations like Jamaate Islami was banned and its Amir Golam Azam was barred from getting Bangladesh citizenship since independence in 1971. They were ushered in to Bangladesh politics by Military rulers in the eighties as a ploy to tackle the mainstream political parties. Now they have gained reasonable influence sadly by patronage of the ruling BNP government, who formed a coalition with them and some other Islamist parties to form a government putting aside Awami League, the leftists and other parties. To note here the combined % of votes of Awami League et al is more than the BNP coalition but beaten by no. of electoral seats. The changing world events, international terrorist joints and the Saudi funds are also playing a lot here.

There is a significant resistant against the Islamists in Bangladesh. Although Bangladesh is a Muslim majority country, you will see sane views always. The picture you are seeing is painted by illiterate & poor painters who has no formal education on paintings and probably ignorant of other events as he does not read newspaper.

The popularity of Bin Laden & Saddam may be more in rural areas and satellite towns like Comilla (Please note almost half of the 140 mill population has not received proper education) because of the exploitation by propaganda in mosques by the Islamists. You know the uneducated are more prone to superstition and influenced by key figures in a village, say the Imams of a mosque. Sadly they do not read newspapers or don't have TV. You will find no support for Bin Laden & Saddam in the mainstream print and broadcasting medias (except from a few Islamist newspapers). Had the people been educated, the Islamists could not have gained this much ground. I would request you to read Bangladesh online journals & newspapers (http://www.bangladeshjournal.com/)

My point is there is a significant resistance in Bangladesh against the Islamists activities influenced by Bin Laden & co. & funded by the evil money from Saudi Arab and Middle Eastern countries. Sadly all Western efforts for the war against terror does not include in stopping these funds from flowing in to poor countries like Bangladesh for exploitation of the poor.

If you would knew Bangladesh and its people, you would have realized that most of the people are struggling to put up a decent life, which is times and again battered by natural disasters and exploitation of rich. They really do not have the leisure of living in harems funded by oil money and doing nothing except brainwashing people to be a human bomb against humanity.

Israel pundits generalized caption does not do justice to these people either. They are exploited again and again and labeled for a crime they did not commit.

I am against all generalization and I would request everyone to know Bangladesh more before reaching at a conclusion.

Rezwan, I think the conflict is in this sentence of yours: "Israel pundits generalized caption does not do justice to these people either. They are exploited again and again and labeled for a crime they did not commit."

I completely agree that these people are exploited. They're not presented any opposing points of view. They're force-fed the Islamist dogma for years and -- no wonder -- they turn out so anti-Western. However, they are (or rather have become) Islamists regardless. I understand they have a distorted and untrue view of the West and would likely change their minds if shown the truth. But they all think that the West perpetually lies, so it's kinda hard to convince them of anything.

If you were to compare the Bangladesh of 1985 to 1995 and to 2005, you'll see that the Islamists have gained influence over time. This is not to say that Bangladesh has become like Taliban-style Afghanistan. I am just saying that the non-Islamists have been, inch by inch, losing ground. Many factors, as you know, account for this such as Wahabbi money, imams who love that money, and politicians who love to exploit anti-Western hysteria for their gains.

This is a worrying trend and Bangladesh is sadly not alone. I was born in Pakistan and there in the North West Frontier Province, Islamists are the kings. There are self-appointed religious policemen who beat up and force men into mosques during prayer time. Businesses close during prayers because of fear. Women wear the hijab if they want to be left alone. Such is not the case in all of Pakistan but the increasing political power of these loons can't be denied.

The same influence can be seen in Indonesia, Malaysia and other non-Arab countries in Asia. I like to see signs of Islamists peaking in these countries and the inevitable backlash against them. But with the passage of time, the non-Islamists appear weaker.