Went ahead and banned his subscription and refunded it. You are all welcome.

How does this "real scientist" explain that men's records are always much better than the women's?

Except the Discus..... which is impressive. Until you see that women throw a much lighter Discus.

You can’t just “grab” someone and they stop. Not how it works. You grab a criminal, he is going to spaz out. Do you body slam him in a crowded subway? Better hope he doesn’t hit his head. Boom now it’s manslaughter. Enjoy your 91% left wing jury. 👍

Cernovich is 100% correct on this matter.

Equity of the day

The woke mob gets another shiny White scalp.

Fact check of the year

The size of the government is absolutely monstrous.

The funny thing about 8 or 9 months is that both figures are wildly optimistic. If the US government was retarded enough to confiscate all that eeevil billionaire wealth today, then it would have to sell roughly ~$3 trillion to get cash. Four points:

Won't you feel sorry for Moderna?

"it's sad to say, I'm in the process of throwing 30 million doses in the garbage because nobody wants them. We have a big demand problem."

It will always be amusing to know that after Canada mandated vaccine passports for government employees, restaurants, cinemas, theaters, for travel, and in some places for simply shopping at Walmart, that we got the largest wave of infection! Many people were coerced into getting the 1st shot, 2nd shot, booster, another booster while being explicitly told that they wouldn't get infected ... and then they got infected.

Not to mention the horrendous side effects from the "vaccines". The general population is no longer interested in bending over for another jab. This can be seen in the numbers as compliance is significantly lower for each additional shot.

Alibaba Group president J. Michael Evans boasts at the World Economic Forum about the development of an "individual carbon footprint tracker" to monitor what you buy, what you eat, and where/how you travel. pic.twitter.com/sisSrUngDI

Monthly mortgage payments for median houses went up from around $1,400 last year to roughly $2,100.

Nominal wages only increased by 5% in the last year and real wages are therefore negative.

House prices should stay stable or even cool off. pic.twitter.com/cXcFcy9901

Add to that the staggering price increases for rent, food, cars, and oil, it'll be a miracle if the US didn't experience a recession.

Those are rookie colors!

Get with the program, comrade!

The storm went through the most densely populated region of Canada:

A damaging derecho swept through southern Ontario and Quebec Saturday, toppling trees and power lines, overturning cars, cutting electricity and even tossing debris through windows. The storms have resulted in at least eight deaths.

Eight deaths. That number is shockingly low considering that cars were flipped, trees were uprooted, and powerlines went down.

A few minutes before it hit, the sun was completely covered, the light dimmed like it was 9 p.m. Then, all the windows started rattling. I looked outside and saw birds attempting to sit still but the wind knocked them away. The maximal level wind and rain lasted about five minutes; we, fortunately, didn't get the worst.

Looks like a coastal city getting hit by a hurricane!

Trees being knocked down and cars being pushed over #ONstorm #ottnews @weathernetwork pic.twitter.com/zCP0ljHNhL

When home is not safe:

Hoping everyone is OK after the storm. We were @BonEchoPP. My husband and I sought shelter in the Visitor Center. Our friends & their 2 kids made it to their car. We are home as we were sleeping in hammocks which were soaked. Today the park is being evacuated. #grateful #ONStorm pic.twitter.com/742zfnsZfA

It's one of the most tone-deaf messages from politicians across the globe: can't afford gas, just buy a cheap $50,000 electric car! Plus, the grids in California and Texas can't even handle the current demand. How the hell will they charge hundreds of thousands of new electric vehicles?

Now comes the story of Zac Kriegman, who, until not so long ago, was a director of data science at Thomson Reuters. Kriegman’s crime? Questioning the Black Lives Matter narrative.

Kriegman is a person who loves numbers and statistics. As you’ll read below, he didn’t just voice an opinion to his colleagues. He made an argument after having done extensive research. He thought logic would win out. He was wrong.

Truth doesn't matter to the Enemy of the People.

One would think that of all magazines, Sports Illustrated wouldn't showcase a severely overweight woman on its cover.

A Yarmouth judge says there's nothing she can do to protect a teenage Syrian refugee whose father allegedly punched her in the face five times and lashed her as many as 50 times with a belt for texting with a boy.

The lovely refugee beat his daughter for over half an hour. The vicious violence resulted in a broken nose. Upon questioning, the Syrian parents replied:

Despite photos of the young woman’s injuries, her father denies the beating ever took place and her mother “saw nothing,” said the judge.

The UN demands it. pic.twitter.com/2a5rhMwFlD

I like how she had to refer to notes to describe her race and sex. This is one sharp cookie. Peppermint Psaki must be feeling mighty humbled. https://t.co/0oJHQk7LJ5

I was hoping for an obese, wheelchair-bound midget for some ULTRA DIVERSITY!

The wicked go to amazing lengths to diminish and deny the colossal criminal characteristics of the colored communities. It's always and forever: White People Bad!

How can she cook!?

A Twitch streamer almost burnt down her kitchen in a cooking stream pic.twitter.com/a5OFh53ZYg

The 360 with the flaming pan made me laugh.

The Premier of Estonia demonstrates, with her fascinating example of how to view geopolitics from the perspective of a junior high school girl’s approach to boys.

One feels sorry for based Estonians.

These 10 items were almost $100 at Costco. The chicken was $31 for half a package. They didn't have chicken thighs, which is what we usually buy pic.twitter.com/1EJAz9dRKp

Ugly but so comfy

Today I bought the ugliest pair of shoes ever created. Truly hideous. Feels like walking on pillows with springs in them tho.

I went to the local mall to buy shoes a few years ago. The stores didn't even have my size. Went to a different mall, visited many stores, and finally a sales guy came back with a couple of hideous black monstrosities. I had tried a lot of ill-fitting and uncomfortable shoes that day and was prepped for disappointment... It felt like I was walking on a cloud! They were New Balance black joggers. A few years later, I tried in vain to find similar shoes. Settled for a different brand.

You will own nothing!

The housing crisis in the San Francisco Bay Area has gotten so bad that one startup is now offering renters the chance to live in a “bunk bed pod” with 13 other people for just $800 a month.

I lived in a student house with 9 other people and we had 3 washrooms and that was sometimes a problem. The luxury apartment above is for 13 people and it has 2 washrooms! How is that going to work?

Two things I've heard often from coworkers on the topic of stocks:

I learned about the stock market in high school in the previous century. Most of these people are older than me and they still don't have a clue.

Waiting for "skin in the game"

This is the boss of @coinbase.
Mr Armstrong, please do not invoke *my* concept of Anti-fragile when you are maximally fragile, while exposing yourself to a yuuge left tail risk.
I am fed up with pple mis-citing my work. https://t.co/3d9kEaqbEp

The Coinbase stock price has crashed by roughly 85% in just over half a year. Definitely, not anti-fragile.

Bitcoin is down over 55% in the same time frame. Definitely, not an inflation hedge. Bitcoin has been the most incredible speculative "asset" of this century but its sheer volatility makes it unreliable for the average person. It could be near $0 or closer to $100,000 by the end of the year.

The Saudis must be very happy with Biden's energy policies:

Saudi Aramco overtook Apple Inc. as the world’s most valuable company, stoked by a surge in oil prices that is buoying the crude producer while adding to an inflation surge throttling demand for technology stocks.

That's quite the change in under five months:

Earlier this year, Apple boasted a market value of $3 trillion, about $1 trillion more than Aramco’s. Since then, however, Apple has fallen nearly 20% while Aramco is up 28%.

Am I the only one who's just not into all this multiverse stuff...?

For me, the great story arc was complete with Avengers: Endgame.

Chanting with the NPCs

The government gave you $1,400 to blow on whatever you want

In exchange they gave you $7,000 worth of annual cost increases through inflation

You think they is gon’ solve this any time soon? Nah.

Think the US housing market is bananas?

Here's a photo of a simple house that's a one-hour drive away from Toronto: 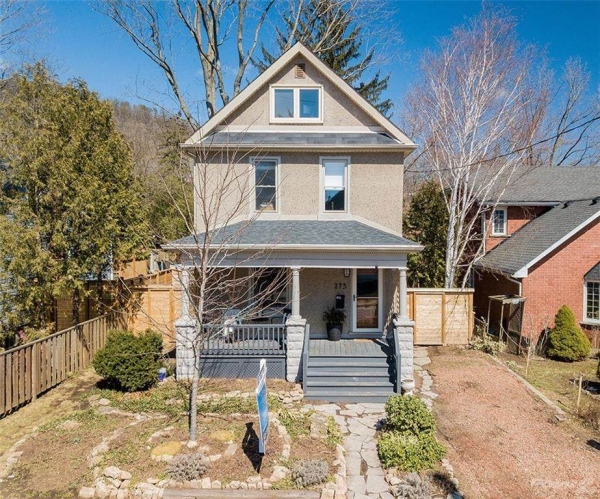 There are 4 bedrooms, 2 bathrooms, and it's 2,100 square feet. Not too small to be cramped and not too big to be ostentatious; it's just the right size for an average family.

Only the top 2% of households in the province can afford it.

The interest rates will be increasing for the rest of the year. The debt-powered fools have to sell crypto, equities, and real estate to cover the higher payments. Short-term, the US dollar will gain strength.

21 lbs lifted per hour spent in the gym? pic.twitter.com/yZVcrkpcKb

I don't even have words for this 😟 pic.twitter.com/yCl87nli8s

You, Me And World War III

We are definitely living through interesting times:

Completely irresponsible. So obvious they are trying to goad a reaction. Wagging the dog into WW3 https://t.co/p0kSphoR12

The pain isn't over

One CEO can see what's coming ahead:

"I thought we may be able to have said that last year. When we started the year, we thought inflation would be up double digits. We have now revised that forecast to be more in the high teens. We are seeing it across a broad basket. We have seen it in our commodities like wheat and other things we cover. We are seeing it in our fuel costs and transportation. We are seeing it in packaging. So it's difficult for me to see the peak now."

I've seen a price increase of roughly 50% for food in the last two years. It's likely going to be another 20% by December. So, a staggering 80% jump in food prices in just 3 years. It wouldn't surprise me if we see an elegant and painful double for 2020-23.

This is your competition pic.twitter.com/egHjCGVeIp

Using this calculator with a few conservative numbers brings the difference to $70,000. That's $5,000 lost every year because this person kept retirement money in cash instead of a basic index fund. All that was needed was curiosity and a weekend of research.